Every periodontal entity has a distinct progressive pattern associated with different bacteria. Thus, it becomes an utmost necessity to treat and control periodontal disease, regardless of its progression pattern and subtype before implant therapy is initiated to improve implant longevity, in the pursuit of excellence in implant dentistry. A higher incidence of peri-implantitis and a lower implant survival rate are being reported in patients susceptible to periodontitis;1,2 it is important to mention that the preexisting ecologic conditions of the oral cavity influence biofilm formation on implants. Success in implant dentistry relies on the initial osseointegration and long-term stability.3 Patient systemic factors and susceptibility to periodontal diseases, implant macrodesign and microdesign, and periodontal pathogenic bacteria, among others, have all been shown to play a role in achieving long-term implant stability.4

A 24-year-old healthy male was a known case of localized aggressive periodontitis (AgP) (Figs 1 and 2) who had received periodontal therapy and extractions with severely drifted lower central incisors before 4 months. He received scaling, root planing, and soft tissue curettage in conjunction with systemic antibiotics. His medical history was not significant, and he had no adverse habits. 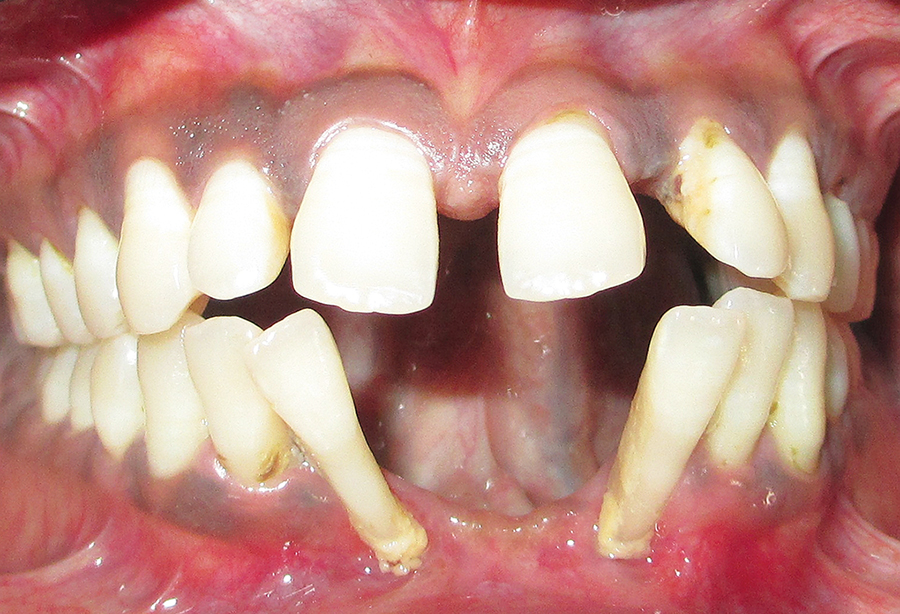 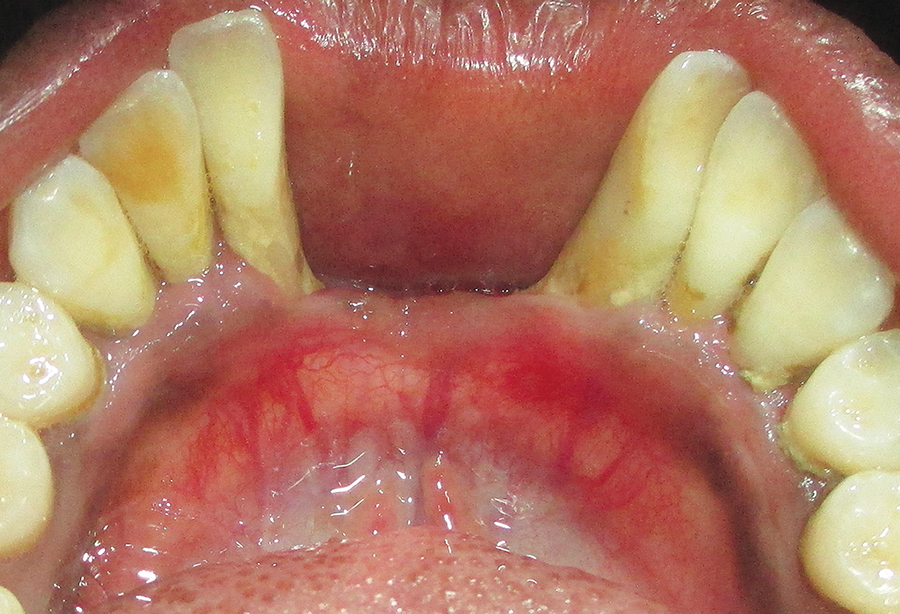 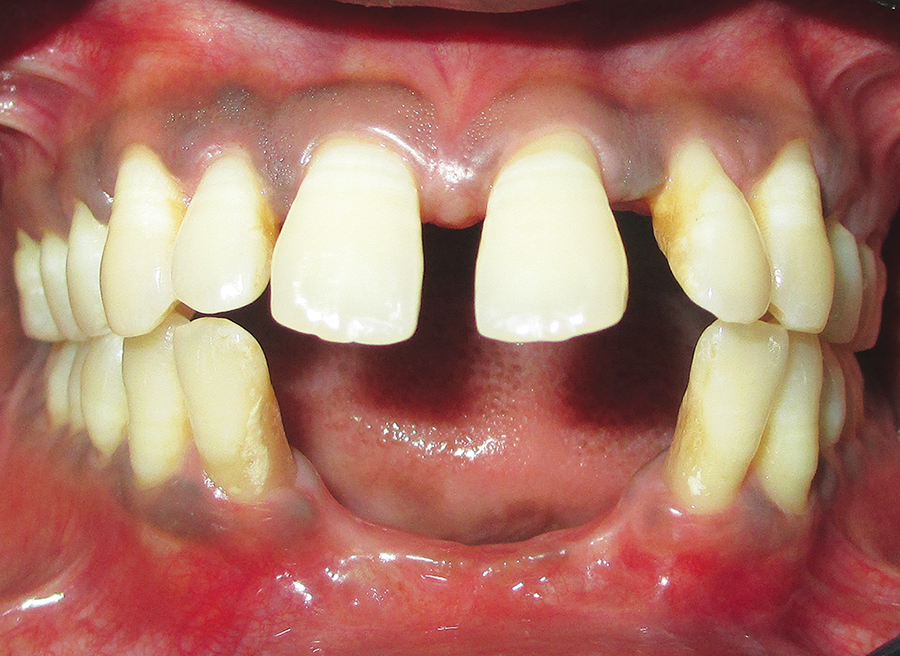 The surgery was performed under local anesthesia – bilateral mental nerve block. Patient was given an antibiotic prophylaxis for 48 hours (amoxicillin 500 mg given orally 1 hour preoperatively and every 6 hours postoperatively). Following midcrestal incision, full-thickness flaps were reflected and implant sites were prepared bilaterally (Fig. 5). Two titanium plasma spray-coated implants, 13 mm in length and 3.3 mm in diameter, were placed in the anterior region of the mandible (Figs 6A and B). Flaps were approximated using 4-0 absorbable (vicryl) interrupted sutures (Fig. 7). Analgesics (tablet ibuprofen, 400 mg every 4–6 hours) along with antimicrobial rinse (0.2% chlorhexidine gluconate twice-a-day for 4 weeks) were prescribed, and the patient was recalled after 7 days for follow-up. 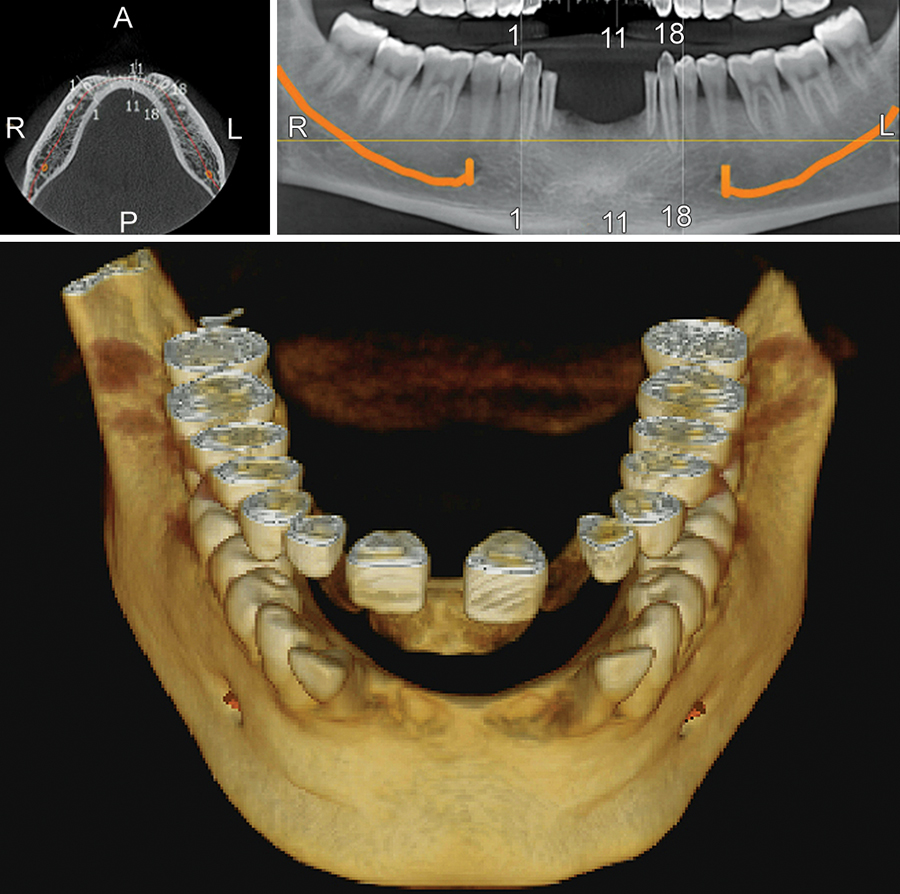 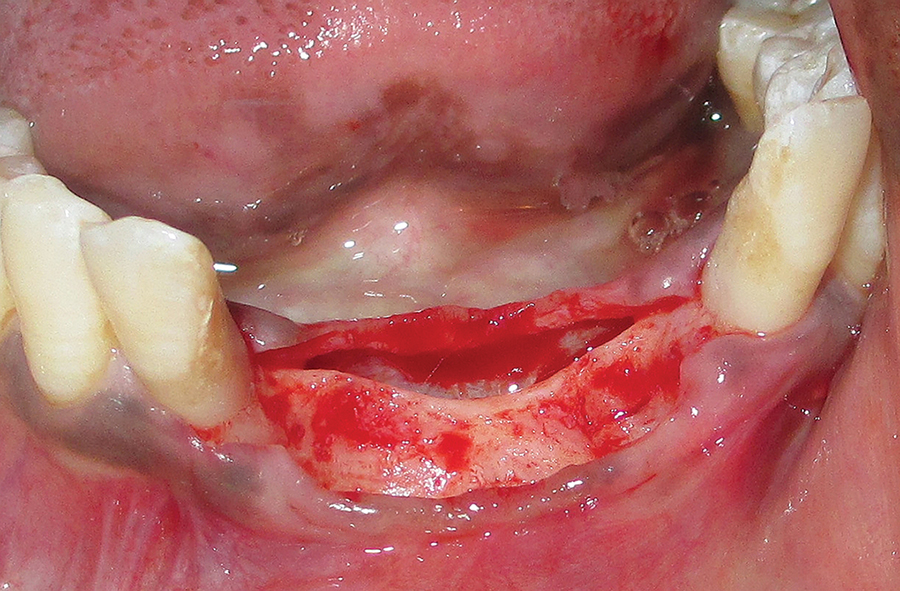 At 3 months postsurgery, the implant sites were reopened with crestal incisions and gingival former was screwed. Healing was uneventful with both the implants well osseointegrated, and phase 2 surgical uncovering was accomplished. The gingival former was replaced with abutments 3 weeks later (Fig. 8) and a four-unit porcelain-fused-to-metal (PFM) prosthesis was inserted (Figs 9A and B). Patient was kept on regular maintenance and follow-up every 4 months (Fig. 10). Both implants were functioning and immobile when tested clinically, with no evidence of peri-implant radiolucency in intraoral periapical (IOPA) radiograph and CBCT at 1-year follow-up postloading (Figs 11 and 12). 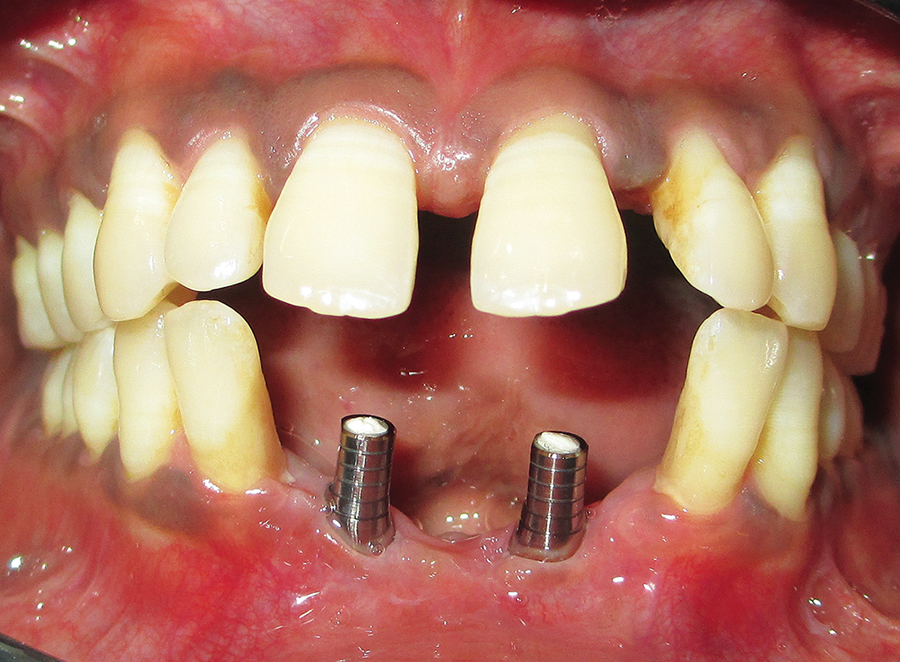 (A) Four-unit PFM prosthesis inserted; and (B) The OPG showing well-connected prosthesis

Baer5 defined AgP as “a disease of the periodontium occurring in an otherwise healthy adolescent, which is characterized by a rapid loss of alveolar bone around more than one tooth of the permanent dentition.” According to the American Academy of Periodontology6 classification, the term “AgP” was adopted as a new name for this unique disease classification, replacing the term “early-onset periodontitis” and the disease being classified into localized and generalized forms7:

Three major characteristics were used to define the aggressive disease7,8:

Other characteristics can also be used in the diagnosis of the disease7-9:

Polymorphisms in genes regulating the expression of IL-1, IL-6, IL-10, tumor necrosis factor, E-selectins, Fc-g receptor, cluster of differentiation 14, toll-like receptors, caspase recruitment domain 15, vitamin D receptor, lactoferrin, caldesmon, heat shock protein 70, and Stac protein 23 and major histocompatibility complexes A9 and B1524 were associated with AgP. As a consequence of these polymorphisms, the inflammatory profile is altered, including, but not limited to, polymorphonuclear neutrophil (PMN) transendothelial migration and signaling functions,10 reduced chemotactic response, and depression in neutrophil phagocytosis and superoxide production.11

Apse et al12 stated that the peri-implant sulcus behaves similar to the periodontal sulcus, and, therefore, an inflammatory process similar to periodontitis occurs around implants, i.e., peri-implantitis. Mombelli et al13 identified the same pathogens in peri-implant lesions as the ones that were present 6 months before in natural dentition. Implant placement in patients with a history of AgP might be considered a viable option to restore oral function, with survival outcomes similar to those found in both patients with chronic periodontitis and healthy patients. However, the risk ratio for implant failure in patients with AgP is significantly higher when compared with healthy patients and those with chronic periodontits.14 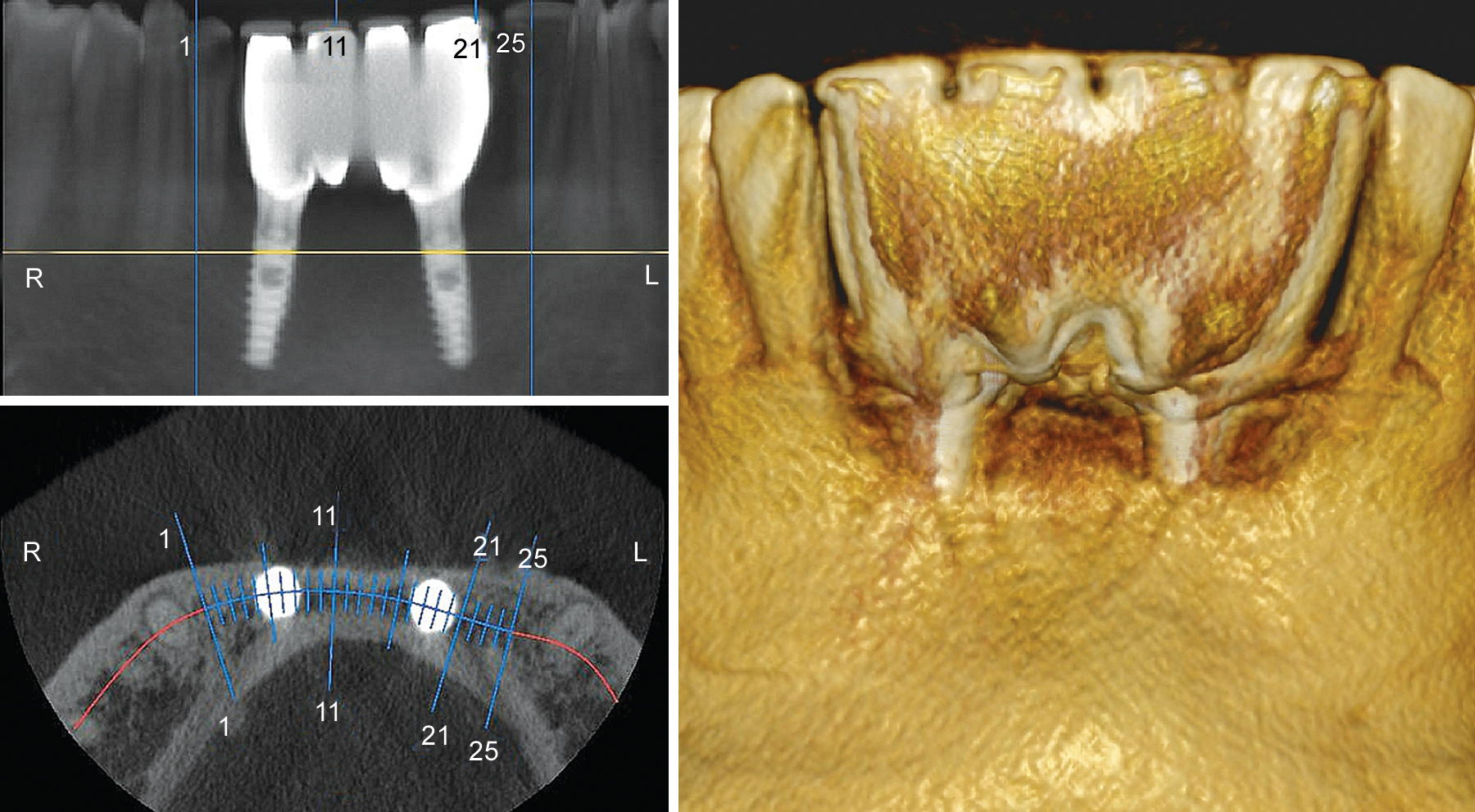 In AgP patients, often unmodifiable factors would potentially play a role in implant success. These factors include10,11,15

Both in AgP and peri-implantitis processes, a comprehensive implant maintenance program to identify peri-implant bone loss early is highly encouraged, specifically in patients with a history of aggressive periodontal disease due to unmodifiable conditions that might play a dominant role. A good case selection, meticulous treatment plan, and good patient compliance with long-term regular follow-up confer successful placement of implants in patients with AgP.