Endodontic treatment requires learning of root canal morphology and its usually occurring variations. Sexual orientation, racial source, and geographic area are a portion of the components bringing about variety in root canal anatomy.1 Endodontic treatment includes cleaning, shaping, and obturation of the root canal framework. To enhance successful accomplishment in endodontics, an exhaustive comprehension of the multifaceted nature of the root canal system is key for understanding the principles and issues of cleaning and shaping, for determining the apical limits and dimensions of canal preparations, and for performing successful surgical procedures.2 Nattress and Martin,3 reported that traditional radiography has issues of superimposition, amplification, and a two-dimensional (2D) representation of a three-dimensional (3D) object. Several studies have been directed on permanent teeth to investigate the anatomy of root canals, viz. direct perception with the aid of a microscope,4 macroscopic sections,5 filling of canals with inert material and then decalcification,6 and filling of canals and clearing.7 However, most of these techniques had serious limitations as most of the relationship of the external structure to the pulp was lost during preparation of samples. These inadequacies have prompted the improvement of 3D procedures.

The advent of 3D imaging has furnished the clinician with expanded understanding of tooth morphology and facilitated interactive image manipulation and enhancement to visualize the area of interest as a 3D volume.8 The detection of additional root canals requires a careful clinical and radiographic inspection. Diagnostic tools, such as multiple radiographs, careful examination of the pulpal floor with an endodontic explorer, and better visualization using an operating microscope are all important aids in the detection of additional root canals. Recently, various attempts have been made to use computed tomography (CT) imaging for the confirmatory diagnosis of morphologic aberrations in the endodontic field.

The advancements in the field of radiology have drawn upon the utilization of CT for imaging teeth. The CT has been extending quickly and cone beam computed tomography (CBCT) is the most recent system, which has been introduced in dentistry since 1991 for imaging hard tissues of the maxillofacial area. There are numerous advantages of this latest system. Firstly, it is an office-based imaging technique, so can be conveniently performed when required; secondly, it procures volumetric information in a single rotation with a short scan time; besides, it produces quality pictures with higher spatial resolution than multislice CT, and to wrap things up, it poses less dangers to patients as a result of the reduced radiation dose required.9 The CBCT utility and significance to the act of endodontics is accounted for with expanding recurrence in the field of endodontics. Therefore, the present study is undertaken to assess the variation in number and morphology of the root canals of primary molars. The objectives for the study were:

For the present study, ethical clearance was obtained from the institutional ethical committee (Approval No. SVIEC/ON/Dent/SRP/15148) of Sumandeep Vidyapeeth. Sample size of 40 extracted primary molars was estimated with 10 maxillary first molar, 10 mandibular first molar, 10 maxillary second molar, and 10 mandibular second molar. Extracted primary molars with at least two-third of intact root and 7 to 12 mm length were included in the study. Before starting, the teeth were cleaned with soap and washed in running water. Hand scalers were used to remove calculus, if present, on the root surface and stored in 0.5% sodium hypochlorite for 1 week. Thereafter, the anatomy of the root canals of these primary molars was assessed through CBCT software (Fig. 1). The CBCT facilities were availed from Nidaan Dental Private Limited (Dent-CAT) for the study. The collected data were entered in the master chart prepared on the computer using Microsoft Excel 2007, and the data were analyzed using Statistical Package for the Social Sciences software for descriptive test (standard deviation, coefficient of variation, mean) and independent test. Infection control protocols were followed during the study, and the extracted primary molars were discarded after the completion of study following the infection control protocols. 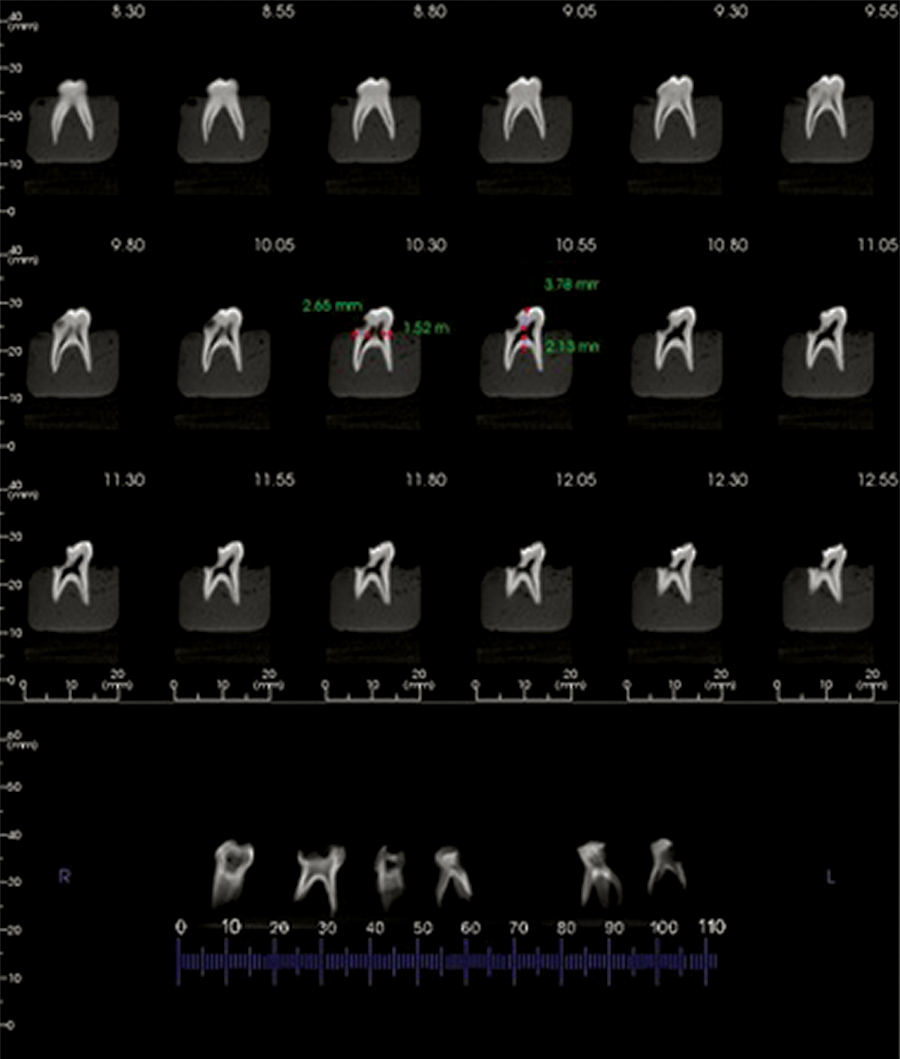 Shape of the canals in maxillary first molar 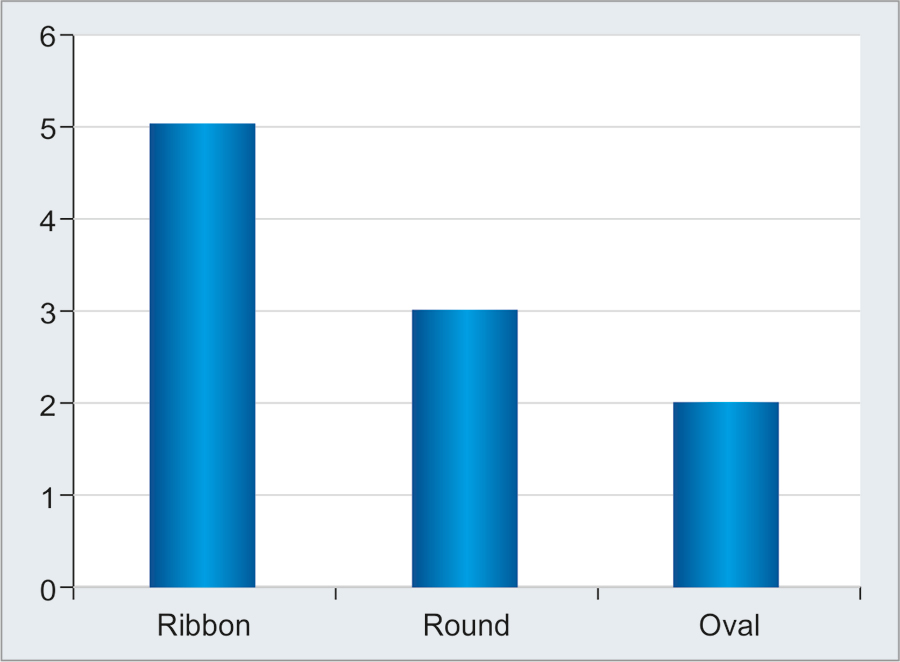 According to the data (Graph 2), the canals were mostly oval in shape. Mesiobuccal and palatal roots showed variations in shape, but distobuccal canal was found to be of round shape.

Shape of the canals in maxillary second molar 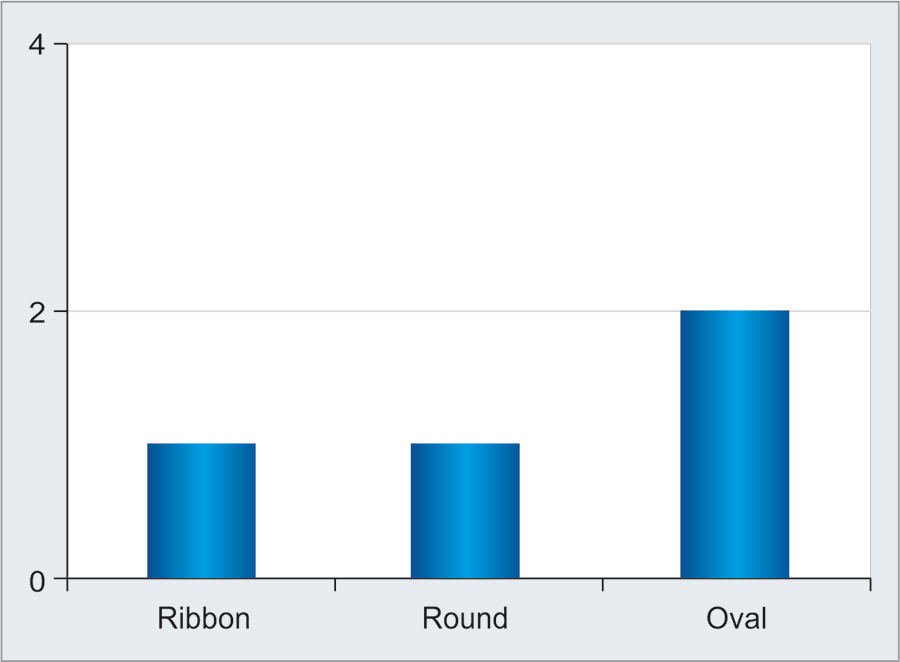 Shape of the canals in mandibular first molar 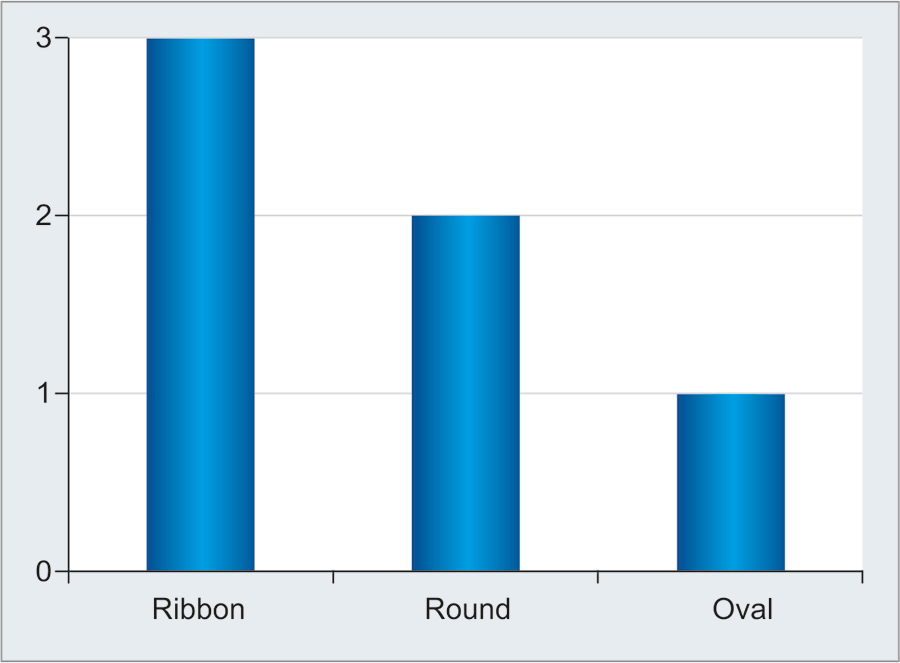 According to the data (Graph 3), the canals were mostly ribbon in shape. Mesiobuccal and palatal roots showed variations in shape, but distobuccal canal was found to be of round shape.

According to the data (Graph 4), the canals were mostly oval in shape. Mesiobuccal roots showed variations in shape, but mesiolingual canal, distobuccal canal, and distolingual canal were found to be of ribbon shape (Table 2).

Shape of the canals in mandibular second molar 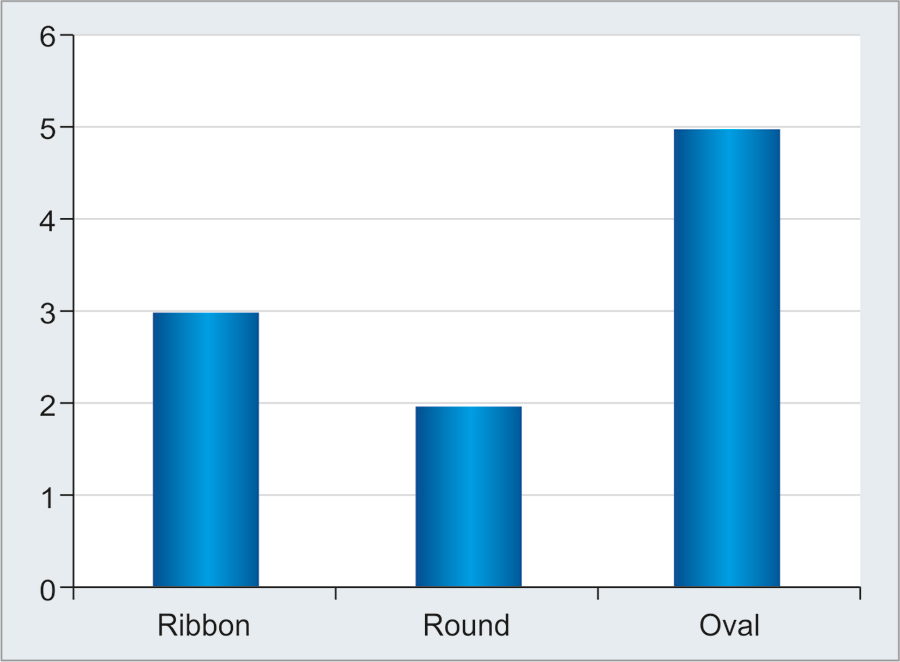 Table 2: Shape of the canals

Dental pulp is a soft gelatinous, living, cellular tissue of ectomesenchymal origin having various functions and is enclosed within bilayered mineralized structures of enamel, dentin, and/or cementum. Radicular pulp canal is like a wide tube, which extends from the cervical region to apical region of tooth. Hertwig's epithelial root sheath initiates formation of size, shape, and number of the radicular pulp. Pulp canals are much larger in deciduous teeth due to thinner layers of enamel and dentin, and there is no clear demarcation between pulp chamber and root canals. The pulp canals are more slender, tapering, and longer in proportion to the crown. Multirooted teeth show greater degree of interconnecting branches between pulp canals and the pulp; which is normally seen in deciduous teeth.10,11

Knowledge regarding the anatomy of primary molars is of utmost importance for various reasons. The distance between roof of pulp chamber and occlusal surface helps and guides us to prevent the perforation of floor of the tooth. For beginners, it is helpful to mark the depth of penetration on the bur itself for prevention of the perforation or removal of larger amount of the unaffected tooth surface.

Similarly, distance between the mesial wall of pulp chamber and mesial surface of tooth helps us for treatment plan, especially the lesions on the proximal surface of the tooth as proximal caries is common in primary molars. Clinicians can have good decision-making in such lesions where the chances of pulp involvement are high. If the operator has knowledge about this anatomy, he/she can have a better treatment output.

Previous studies on root canal anatomy used demineralizing and injecting a dye technique, which produced irreversible changes to the experimental sample. Few researchers have used radiographs to assess root canal morphology, but their accuracy is limited as they construct a 2D image of a 3D object and this can lead to superimposition of the root canals.11

Table 3: Number of accessory canals and their frequency of occurrence

Till date, many techniques have been used for studying the canal anatomy, an ideal technique would be one that is precise, easy, nondestructive, and, most importantly, feasible in the in vivo scenario. Although canal staining and tooth clearing are generally considered the gold standard in these studies, they have limited clinical applicability. However, digital radiography can be used in vivo, but was proved to be significantly less accurate than decalcification and sectioning by Zheng et al.12

The CBCT has been used successfully in endodontics for the diagnosis of endodontic pathosis and canal morphology, assessment of pathosis of nonendodontic origin, evaluation of root fractures and trauma, analysis of external and internal root resorption, invasive cervical resorption, and presurgical planning.13,14 It has been shown that the rarer the aberration, the more likely it is to be bilateral in occurrence.15 In the present case, CBCT was used for better understanding of the complex root canal anatomy. It is a noninvasive, 3D imaging technique, which can be used in vivo.16

The results of this study were quite similar to those of previous studies, and CBCT proved to be as accurate as the gold standard in studying the presence of accessory canals with clinical applicability.17 In the present study, all primary maxillary and mandibular molars had variations in pulp morphology. Similar observations were found by Edwin and Cohen.18,19 Presence of accessory root canals in primary molars was confirmed by Simpson, Skillen, and Winter.20-22

Endodontic treatment is essentially directed toward the prevention and control of pulpal and periradicular infections. However, the success of endodontic therapy depends on the knowledge of root canal anatomy. The present study reveals that CBCT can be considered to be an advancement over the existing techniques, with accuracy similar to the gold standards in studying and clinical applicability. Treating additional aberrant canals can be challenging, but the inability to find root canals may cause failures. The evaluation of CBCT images can result in better understanding of root canal anatomy, which enables the clinician to investigate the root canal system and to clean, shape, and obturate it more efficiently.