The three primary correlates of human dental occlusion – dentitional development, craniofacial growth, and neuromuscular maturation, while constantly interrelated in function, nevertheless develop at different schedules. As a result, the development of occlusion is one of the most fascinating and complicated problems in all of development biology. Every oral health care provider must take necessary measures to evaluate and monitor the development toward optimal results. There are many morphogenetic and environmental influences affecting the occlusal development, and a disorder in any of these elements may influence the occlusion.1

Premature exfoliation or extraction of primary tooth may lead to loss of space due to drifting of the adjacent teeth. This may also lead to undesirable effects, such as impaction of the succedaneous tooth, overeruption of the opposing tooth, and a shift of the midline, with consequent functional impairment.2 It is prudent to consider space maintenance when primary teeth are lost prematurely. Factors to consider include specific tooth lost, time elapsed since tooth loss, preexisting occlusion, favorable space analysis, presence and root development of permanent successor, amount of alveolar bone covering permanent successor, patient's health status, patient's cooperative ability, active oral habits, and oral hygiene.3 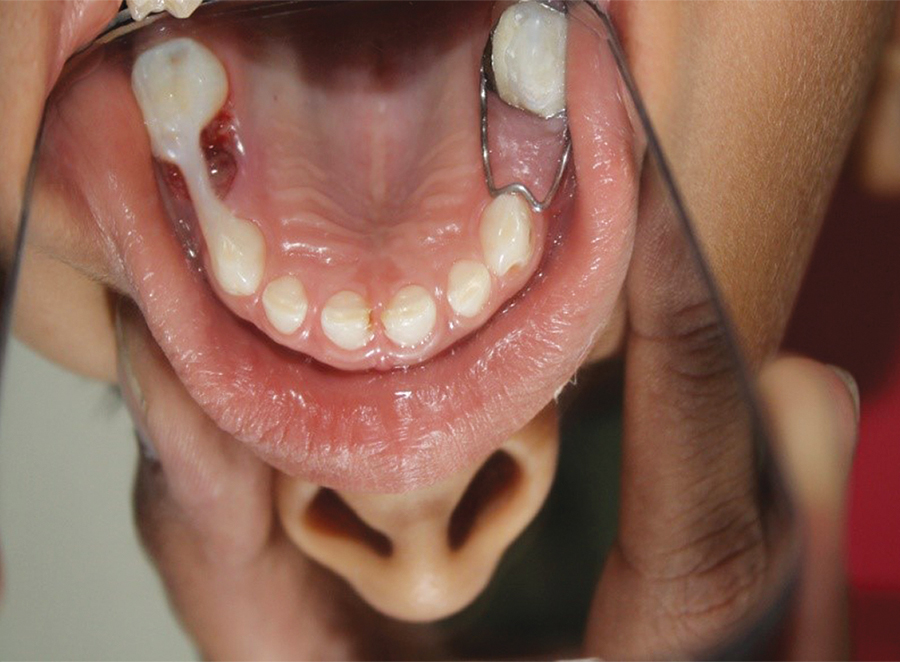 Patients requiring bilateral extraction of primary first molars were selected for the study based on inclusion and exclusion criteria, and randomly assigned to any one group. Informed consent was obtained from the parent or the guardian. For every selected child, oral prophylaxis and other restorative treatments were carried out. Any carious lesion on abutment teeth selected for group I cases were restored with permanent restoration, whereas carious lesion on the mesial and distal surfaces of abutment teeth selected for group II cases were restored with temporary restoration (intermediate restorative material), so that they will serve as future sites for fiber placement. Upper and lower impressions were made, and study models were prepared. Measurement and recording of space present between primary canine and primary second molar preoperatively were done using preoperative cast and radiograph, which served as baseline data.

Distortion/dislodgment and the fracture of the loop or the fiber frame were assessed clinically. Gingival health was assessed using the gingival index.

The gingival index assesses the quality, severity, and location of the gingival inflammation. The assessment was done with a mouth mirror and probe in presence of adequate natural light.

The scoring pattern was as follows:

Band pinching was done on second primary molar using band material (0.005 by 0.180 by 2 inches). Alginate impressions were made. The band was transferred from the tooth to the impression. Casts were poured after stabilizing the bands. Tooth to be extracted was scraped in the cast. A loop was fabricated for the space maintainer using 19-gauge wire. The band and loop were soldered together followed by polishing of the same. In the next appointment, extraction of the indicated tooth was carried out followed by cementation of space maintainer using type I glass ionomer cement. 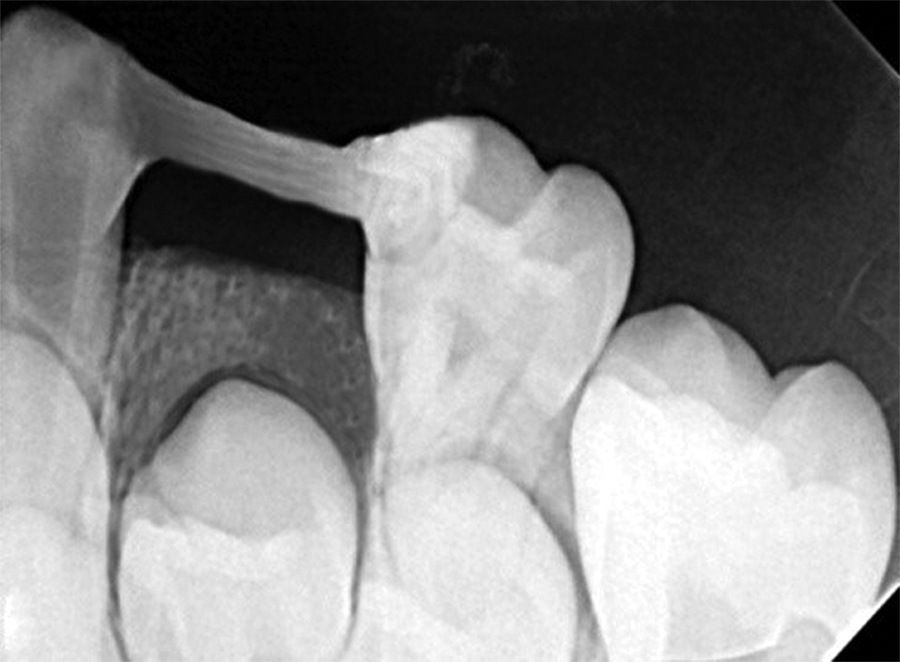 Data were collected by clinical and radiographic evaluations at 1, 3, 6, and 12 months (Figs 2 and 3). Subsequently, all the values of the data were subjected to suitable statistical analysis for comparative evaluation.

Based on statistical analysis, overall success rate of group I was found to be 69.2% and of group II was 95.7% (p = 0.026), which was statistically significant (Table 1 and Graph 1). The GFRC space maintainers showed an overall success rate compared with band-and-loop space maintainers. Based on statistical analysis of inter- and intragroup comparison at 1, 3, 6, and 12 months interval, distortion/dislodgment of the loop or the fiber frame, fracture of loop or fiber frame, and space loss were found statistically insignificant. Gingival health observed between groups I and II at 12 months follow-up was found statistically significant (p = 0.026). 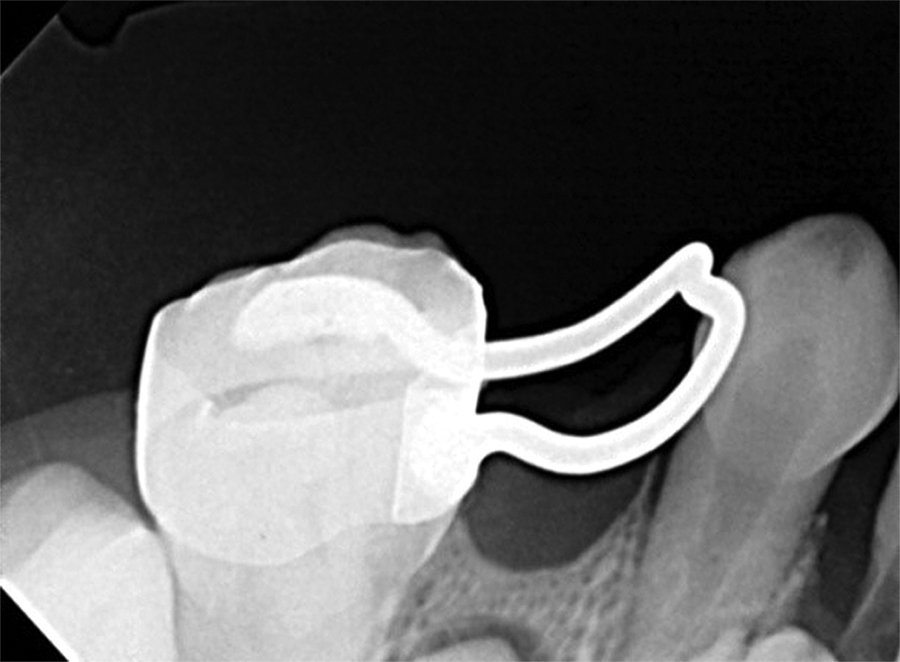 Values are n (%). p-value is obtained using chi-square test, if cell frequencies are greater than 5, else Fisher's exact probability test is applied. p-value <0.05 is considered to be statistically significant

As defined by Moyers,1 space supervision is “when the judgement of dentist determines that the individual patient's occlusion will have a better chance of obtaining optimum development, through supervised intervention of the transitional dentition than without clinician directed intervention.” Space maintaining utilizes an appliance to preserve space without necessary awareness of the dynamics of the situation.5

The band–loop appliance has been used after the premature loss of the primary molar. The major components of this appliance are a band on the abutment tooth and a loop that traverses the edentulous space and is wide enough to allow eruption of the succedaneous tooth. Although this appliance has been effective, it has its own limitations. Thus, long-term wear requires periodic recementations.7,8 Bands on abutment teeth may interfere with oral hygiene, leading to an increased caries activity.9 Rising laboratory costs and other inflationary factors also have made the appliance more expensive.

Glass fibers were used to reinforce polymethyl methacrylates. This group is a very heterogeneous one depending on the nature of the fiber, the geometrical arrangement of the fibers, and the overlying resin material. The main materials used are either glass or polyethylene fibers. Polyethylene Fiber (Ribbond) are esthetic, but their handling properties and ﬂexural strength is inferior as compared with GFRC.10 EverStick GFRC post has been previously used to restore severely mutilated primary anterior teeth.11 It has shown success in three-unit bridges and in stress bearing areas as well.12

Evaluation at the end of the study period (12th month follow-up) showed failure of GFRC space maintainer in 7 cases (23.3%) and band–loop space maintainer in 4 cases (13.3%, p = 0.506). The supraerupted opposing tooth impinged on the fiber frame, which resulted in increased concentration of mechanic stresses that lead to debonding at the fiber interface. Further wearing away of the thin layer of composite on the fiber frame during mastication resulted in gradual failure. Subramaniam13 et al stated that overzealous finishing of the space maintainer results in excessive removal of the resin overlying the fiber, which leads to debonding. 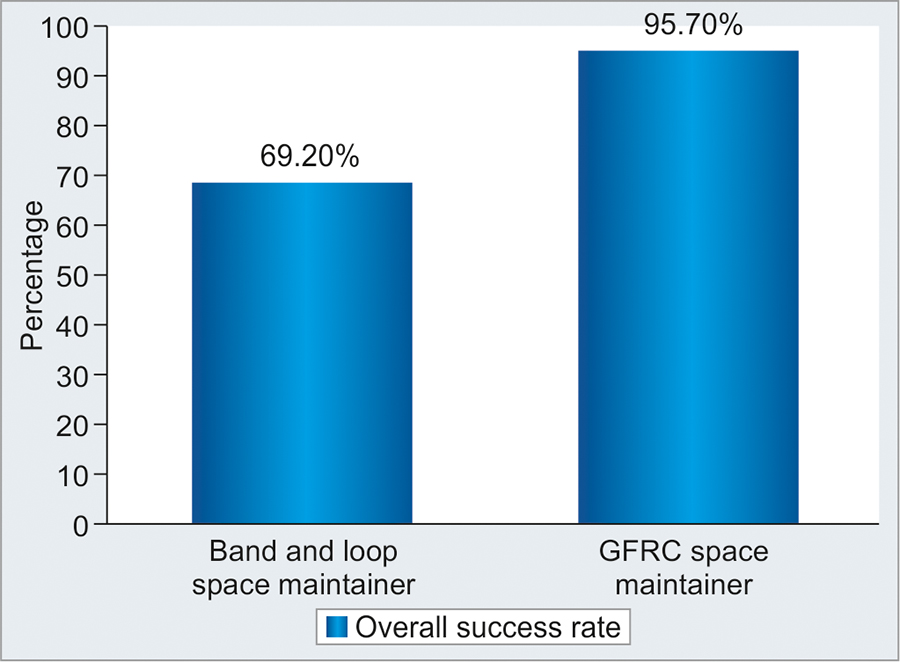 The GFRC space maintainers showed an overall success rate (95.7%) compared with band-and-loop space maintainers (69.2%), and this difference was statistically significant. Space management forms a critical component of successful pediatric dental treatment. Most of the conventional methods involving bands and wire primarily consume a lot of time, energy, and effort. Fabrication of a band–loop space maintainer requires three steps. On the contrary, fiber space maintainers can be placed instantly in a single sitting only.

The development of the ﬁber-reinforced composite technology has brought a new dimension into the realm of metal-free adhesive esthetic dentistry. EverStick glass fiber is a highly versatile material with an array of desirable properties, which allow us to practice esthetic, instant, and multiquadrant dentistry in a single visit, and keep our pediatric patients and their parents happy.