The word dermatoglyphics is derived from two Greek words (derma meaning skin, glyphic meaning to carve) and refers to the friction ridge formations that appear on the palms of the hands and soles of the feet.1 Dermatoglyphics is the scientific and analytical study of fingerprints. Every individual's fingerprints are distinctive; one can determine one's ingrained potential, individuality, and choices by interpreting dermatoglyphics. Dermatoglyphic patterns vary from person to person.

A twin-city survey was conducted in Mumbai and Pune reviewing a total of 300 children. Twin cities are a special case of two cities or metropolitan centers that are found in close proximity and then expand into each other over time. Cities twinned by proximity do not necessarily match demographically, economically, or politically.

The dermatoglyphic study aspires to interpret the papillary ridges, the small markings that constitutes one's fingerprints and exist on all humanoid skin. The development of these papillary ridges occurs during a short window of development2 and is affected by genetics and the environment in utero. Being affected by the environment during the intrauterine life suggests that the monozygotic twins would have variegated dermatoglyphic markings.3-6 The ridges remain constant over postnatal life; hence; it has several forensic applications.

Two centers were selected in Pune and Mumbai. A total of 300 patients (150 patients in each center) were randomly selected from the age group ranging between 3 and 5 years.

The samples were divided into two groups; group I: Caries group, and group II: Caries-free group. Group I was further divided into children with ECC and children with rampant caries. Clinical examination of dental caries was done using a mouth mirror and a probe (only to remove debris and not probe into the fissures)7 in daylight or suitable light source. Fingerprints were recorded using the ink method. The hands of the children included in this study were washed with water to improve the quality of the prints. 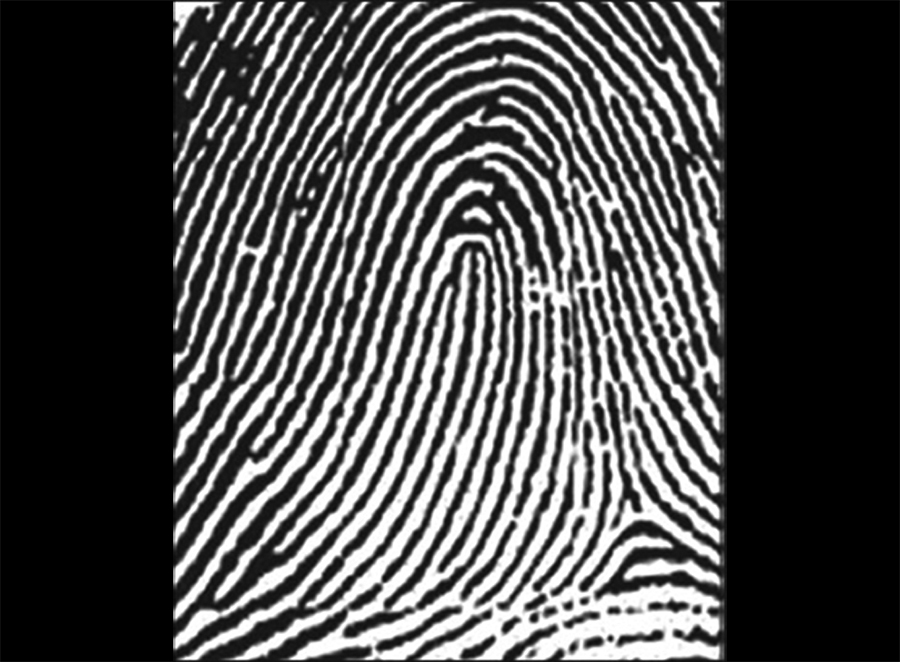 The fingerprints of all subjects were recorded using black duplicating ink. The fingers were uniformly pressed on the ink pad after which the digits were pressed firmly against the white paper by the operator to avoid bias. A magnifying glass (×2) was used to assess the fingerprints.

The handprints were assessed under a magnifying glass with ×2 power sequentially in both the hands. This study included qualitative analysis, i.e., the fingertip patterns (loops, whorls, arches).

The frequency or manifestation of true patterns of loops, whorls, and arches was counted on the fingertips of all the 10 digits of children in all the groups. They were assessed for increase or decrease in mean frequencies.

A loop is identified as an array of ridges that intrudes the paradigm area on one side of digit, convolutes abruptly, and leaves the paradigm area on the same side. Where the loop is closed, a single triradius is formed; this is located laterally on the fingertip. It is termed as ulnar loop if the ridge opens on ulnar side and is called as the radial loop if it opens toward the radial side (Fig. 1). 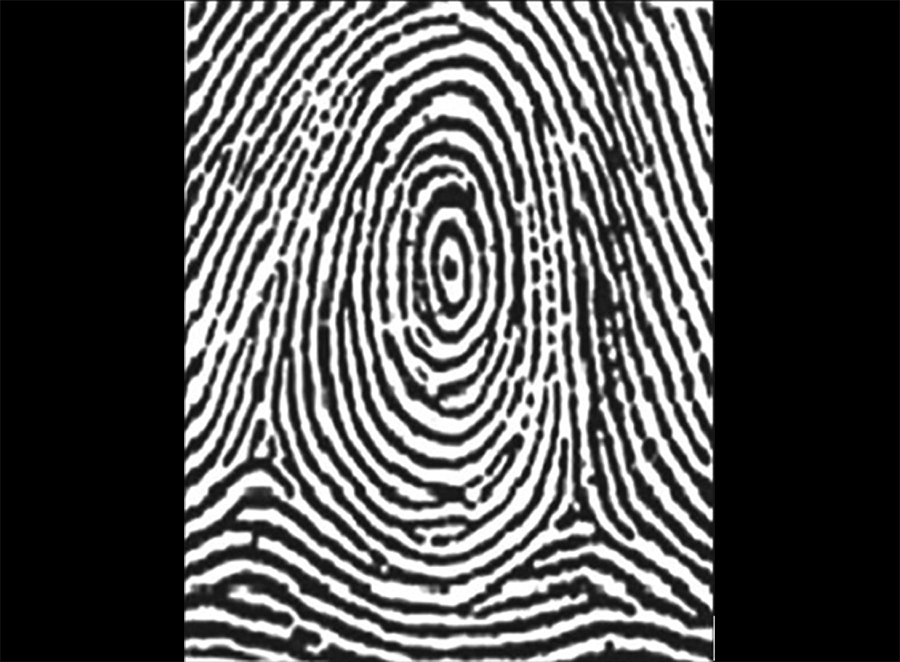 A whorl consists of concentric arrangement of ridges. Based upon the internal structure of the whorl pattern, it can be presented as spiral, symmetrical, double looped, central-pocketed, or accidental (Fig. 2).

Of all the dermatoglyphic patterns seen, arches depict the simplest ridge pattern, which is formed by the succession of one or more parallel ridges, which traverse the finger from one side to the other without convoluting (Fig. 3). 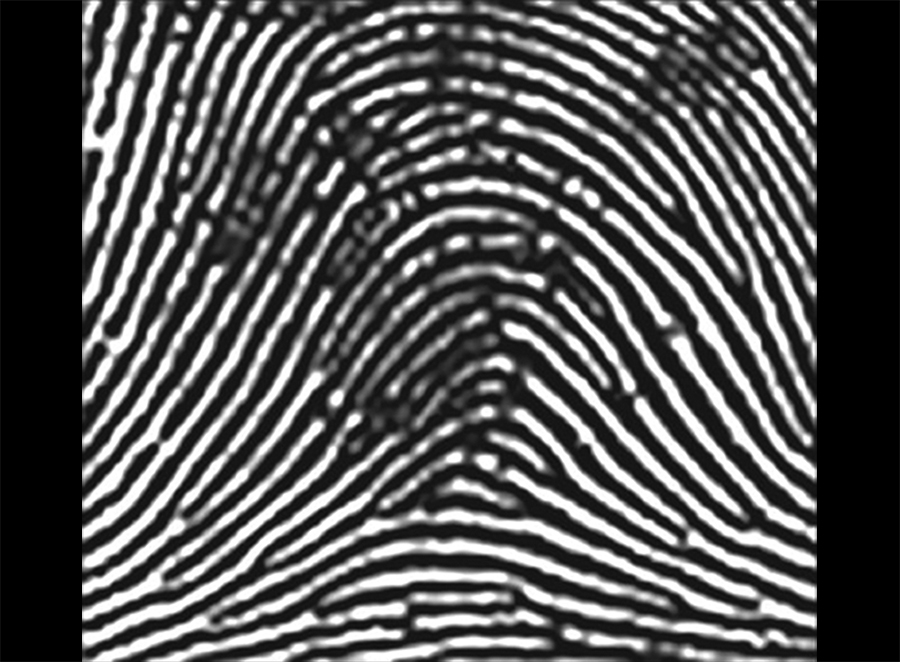 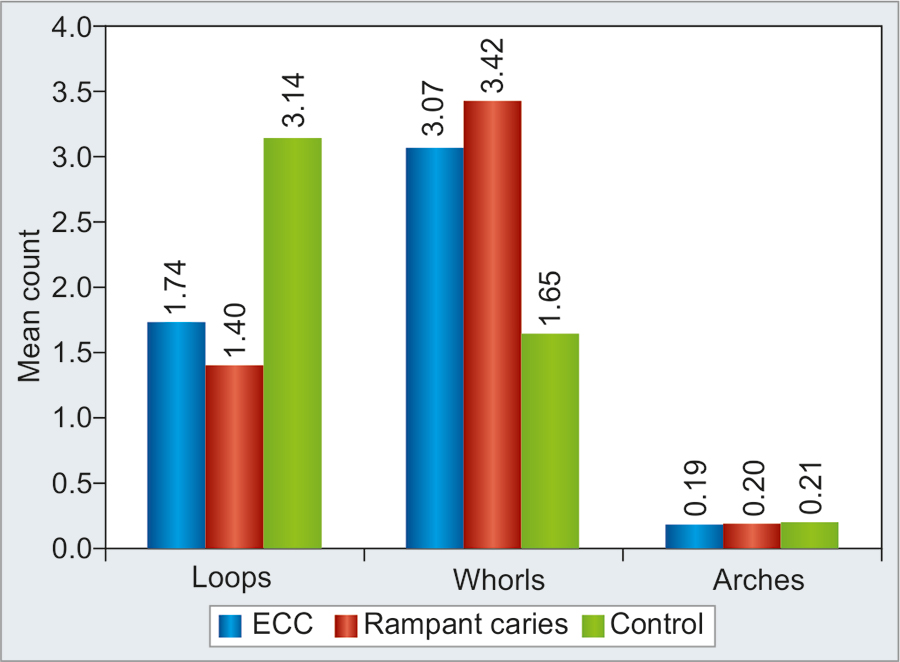 Widespread and expansive interest in epidermal ridges has developed only in the last several decades when it became obvious that many patients with chromosomal defects had abnormal ridge formations.9,10 Dermatoglyphic patterns make good material for genetic studies, because unlike stature, intelligence, and body weight, they are not significantly influenced by age or by postnatal environmental factors.11 Dermatoglyphics have the advantage of remaining stable throughout life and, therefore, can be compared among individuals of different ages.

Both the enamel and the epithelium of the finger buds have an ectodermal origin and both develop concomitantly during intrauterine life.12,13 This develops the basis of considering dermatoglyphic patterns as genetic markers for dental caries.

These results were substantiated by Atasu14 who found an increased occurrence of ulnar loops in caries-free children and an increased occurrence of whorls in children with dental caries. The majority of whorl patterns in the control group were spiral, while the caries group showed spiral, central pocket, and double loop. Arches were the least common patterns in both the groups.15,16

A definite correlation in the dermatoglyphic patterns between children with caries and caries-free children can be seen in this study.13,17 Thus, during their first dental visit, recording the dermatoglyphic patterns of children will prove to be an adept predicting tool to determine whether the child belongs to the high-risk group or the low-risk group, and, thereby, can aid in planning and coordinating a definitive preventive and treatment approach.

The dermatoglyphic patterns may be employed effectively to study the genetic root of dental caries. In a developing country like India, it might prove to be a noninvasive, economical, and effective tool for screening. These patterns may represent the genetic makeup of an individual and, therefore, it suggests an individual's predisposition to certain diseases.

Since dermatoglyphics is still a counterfactual and imprecise science at present, it requires further extensive research to ascertain the significance of these variations in the dermatoglyphic features of children with dental caries.