Diabetes is one of the major health problems worldwide, with a prevalence that is expected to reach more than 550 million patients by 2030.1 Also, it is one of the leading causes of renal disease resulting in a very high prevalence among dialysis patients.2 It is estimated that approximately one-third of patients with T2DM have some degree of renal impairment3 and that chronic kidney disease (CKD) is detectable in an important part of diabetic patients.4

ROLE OF THE KIDNEY IN GLUCOSE HOMEOSTASIS

Despite wide fluctuations in the daily supply of glucose and the body's demand for it, homeostatic mechanisms maintain plasma glucose levels within a narrow range, with average levels of ~90 to 100 mg/dL in a 24-hour period.5,6

The kidney's crucial role in maintaining glucose balance was first described as early as 1938.17 Along with the liver, the kidney supplies glucose during periods of fasting. The renal contribution to gluconeogenesis is ~15 to 55 gm/day, or 20 to 25% of the glucose released into the circulation after an overnight fast.7,8

The reabsorption of glucose filtered into the glomerular filtrate is the primary mechanism by which the kidney influences glucose homeostasis.8 Glucose excretion in urine is the net difference between the amount of glucose filtered by the kidney and the amount reabsorbed. In healthy individuals, the kidney contributes significantly to glucose homeostasis by reabsorbing essentially all of the ~180 gm of glucose that it filters per day.9 Individuals without diabetes thus have very little or no glucose present in the urine.

Reabsorption occurs in the PCT and is carried out by two isoforms of SGLT.20 The SGLT2 is located in the S1 and S2 segments of the PCT and has a high capacity but low affinity for glucose transport. In healthy individuals, it reabsorbs ~90% of filtered glucose (Fig. 1).20 The SGLT1 governs glucose transport in the S3 segment and is a low-capacity, high-affinity glucose transporter (GLUT) that reabsorbs the remaining 10% of the filtered glucose.10 The active transport of glucose is linked to downhill sodium transport, which is maintained by active extrusion of sodium across the basolateral surface into the intracellular fluid (Fig. 2).10 Facilitated GLUTs carry glucose across the basolateral membrane by facilitated diffusion.10 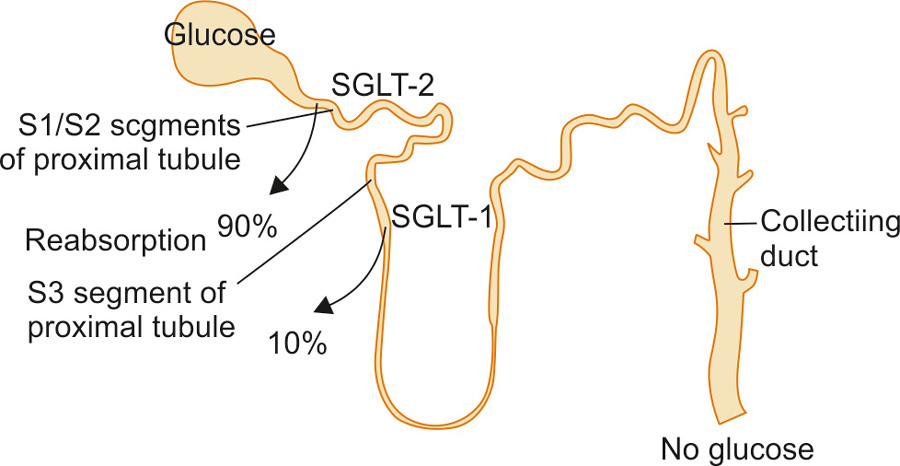 The SGLT2 mediates glucose reabsorption in the kidney. The SGLT2 catalyzes the active transport of glucose (against a concentration gradient) across the luminal membrane by coupling it with the downhill transport of Na+. The inward Na+ gradient across the luminal epithelium is maintained by active extrusion of Na+ across the basolateral surface into the intracellular fluid. Glucose diffuses out of the cell down a concentration gradient via the basolateral facilitative transporter GLUT210

Hyperfiltration is an early renal hemodynamic abnormality in experimental models of diabetes and is thought to reflect increased intraglomerular pressure.11-13 In humans, the prevalence of renal hyperfiltration in subjects with T1DM has been reported to be as high as 60%, and this condition is accompanied by a significantly increased risk for development of DN in many studies.14-16 The pathogenesis of hyperfiltration, however, is complex and involves changes in both neurohormonal/vascular factors (the vascular hypothesis) as well as TGF mechanisms (the tubular hypothesis).

The tubular hypothesis is based on an increase in proximal tubular glucose delivery attributable to chronic hyperglycemia in DM. This leads to a maladaptive increase in glucose reabsorption along with sodium via the sodium—glucose cotransporter 2 (SGLT2) in the proximal tubule. As a result, distal sodium chloride delivery to the macular densa is decreased.11

This distal tubular condition is sensed as a low effective circulating volume stimulus at the level of the juxtaglomerular apparatus, causing an afferent renal vasodilatory response. The consequence of this altered TGF results in supranormal GFR values into the hyperfiltration range. Targeting TGF in renal hyperfiltration has shown promising results in experimental animal models by using phlorizin, a nonspecific inhibitor of the renal tubular GLUTs SGLT1 and SGLT2.17,18 The clinical relevance of these findings, however, could not be conclusively studied in humans, because of the poor tolerability of phlorizin resulting from its low selectivity for SGLT2, SGLT1 inhibition-related gastrointestinal side effects, and very limited oral bioavailability.18 Subsequent studies with selective SGLT2 inhibitors in animals have also shown similar significant effects on renal hyperfiltration.19

The first SGLT2 inhibitor, known as phlorizin, was isolated from the bark of the apple tree in 1835 and was used firstly as an antipyretic. The glucosuric effect of phlorizin was discovered only 50 years later and its mechanism of action was found to be localized at the PCT in the 1970s.20

Animal studies on phlorizin demonstrated normalization of both fasting and postprandial plasma glucose concentrations in diabetic rats, improvement in peripheral insulin sensitivity, improvement in insulin secretion, and decline of elevated plasma glucagon levels in diabetic dogs. Due to poor oral bioavailability (15%), low SGLT2 selectivity, and gastrointestinal side effects from SGLT1 inhibition, phlorizin failed to progress to use in humans. Nevertheless, its beneficial effects on diabetic patients triggered research on other agents that inhibit SGLT2 transporters.20

In human studies, it has also been reported that canagliflozin lowers the RTG in diabetic patients from 240 mg/dL (in normal individuals this value is 180 mg/dL) to approximately 80 to 90 mg/dL. Additionally, a significant HbA1c reduction has been exhibited in diabetic patients treated with dapagliflozin, canagliflozin, empagliflozin, and tofogliflozin. Furthermore, treatment with ipragliflozin for 12 weeks induced a dose-dependent decrease in HbA1c from –0.49 to –0.81%. Administration of dapagliflozin produces glucosuria-related urinary calorie loss (200—300 calories/day).21 In addition, inhibition of renal glucose reabsorption from empagliflozin ranged from 13.1 to 49.6% with single doses from 1 to 100 mg and the amount of glucose excreted in the urine within the first 24 hours after empagliflozin administration ranged from 19.6 gm for a 1 mg dose to 74.3 gm for a 100 mg dose. The UGE in ipragliflozin-treated patients was dose-dependent and reached approximately a maximum of 59 gm glucose. Dapagliflozin significantly decreases both fasting plasma glucose (FPG) and postprandial glucose levels.20

Mean systolic and diastolic BP were found to be lower in patients treated with dapagliflozin, possibly because of osmotic diuresis and volume reduction, or canagliflozin.23

The SGLT2 inhibitors also demonstrated beneficial effects on the lipidemic profile of T2DM patients. High-density lipoprotein cholesterol significantly increased with canagliflozin and triglycerides presented a small reduction, although only one trial reached significance. The β-cell function and homeostatic model assessment 2B improved in patients treated with canagliflozin. It was shown that SGLT2 inhibitors evoked beneficial effect on β-cell mass and retarded the loss of β-cells in T2DM, possibly by lowering glucose toxicity (Table 1).20

According to the existing clinical studies, the most common side effects of SGLT2 inhibitors are the increased incidence of genital infections (GIs) and urinary tract infections (UTIs) that could be attributed to the glucosuric effect of these agents.

Due to their mechanism of action, SGLT2 inhibitors have a very low risk of hypoglycemia. The reported hypoglycemic episodes were mild-to-moderate in severity. Other side effects that can be observed with SGLT2 inhibitors are polyuria and thirst, which can be assigned to osmotic diuresis due to the glucosuric effect of SGLT2 inhibitors.

Hyperketonemia and ketonuria were also observed, as a result of increased lipolysis and mobilization of lipids and free fatty acids. It was recently described that the potential mechanisms that may be responsible for ketoacidosis in patients treated with SGLT2 inhibitors include lower insulin and higher glucagon levels that lead to increased lipolysis and ketogenesis and potentially increased renal tubular reabsorption of ketones.

Glucose-lowering Efficacy of SGLT2 Inhibitors in Patients with CKD

Data regarding the efficacy and safety of SGLT2 inhibitors in patients with T2DM and CKD present a special interest, given that renal failure is a common complication of T2DM, and UGE is related to GFR and blood glucose levels. According to a dapagliflozin study on diabetic patients with CKD, decreasing GFR restrains the ability of dapagliflozin to inhibit tubular glucose reabsorption.20

The changes in GFR during SGLT2 inhibition are similar in patients with normal renal function and in those with CKD. The time course of changes in renal function is typically characterized by a rapid decline in GFR during the first weeks of treatment, followed by a progressive recovery that is faster and more evident in patients with normal renal function at baseline. Studies performed in patients with moderate renal impairment25-27 demonstrated significant renal effects; thus, treatment with dapagliflozin (104 weeks),21 canagliflozin (26 weeks),26 and empagliflozin (52 weeks)27 resulted in an initial decrease in eGFR with a trend toward an increase over time (Figs 2 and 3). In patients with CKD stage 3, after 1 week of treatment, there was a reduction in eGFR21 with a progressive recovery of GFR during the following weeks (Fig. 2). In a study where patients with eGFR of 30 to 50 mL/min/1.73 m2 were randomized to canagliflozin or placebo for 26 weeks,26 a similar eGFR course was observed

Finally, in CKD stage 3, patients treatment with empagliflozin 25 mg had reduced eGFR by 4 mL/min at 12 weeks, with a slight recovery at 52 weeks. Interestingly, after drug discontinuation, GFR returned to the baseline values, suggesting that the decrease in GFR during treatment is hemodynamic and not consequent of renal injury.27 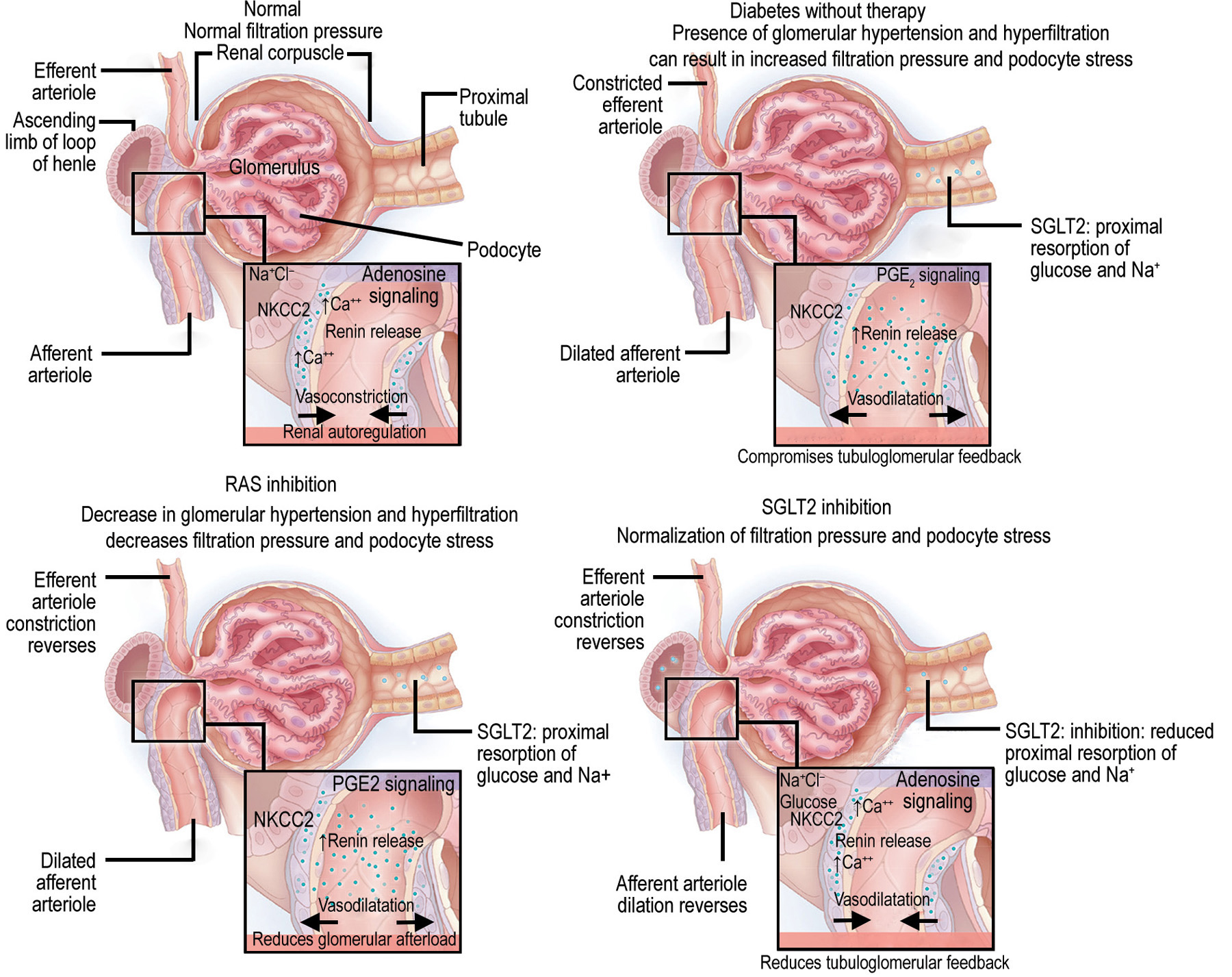 It is the first time in diabetes history that the kidneys have been used as a therapeutic target. The SGLT2 inhibitors, this new class of antidiabetic agents, via glucosuria induction, significantly decrease HbA1c and FPG levels. Given that these agents do not interfere with insulin secretion and action, β-cell progressive failure does not attenuate their efficacy. Nevertheless, as the glucosuric effect depends on renal function, the efficacy of these agents decreases along with the stages of renal impairment. The SGLT2 inhibition also provides a significant beneficial effect on body weight and BP reduction due to calorie loss and osmotic diuresis from glucosuria.

Being a new kid on the block, large randomized controlled trials (RCTs) are necessary to investigate the long-term effects of SGLT2 inhibitors on renoprotection and cardiovascular safety in diabetic kidney disease patients.

The current RCT evidence showed that SGLT2 inhibitors increase the risk of GIs, and the effects may differ among SGLT2 inhibitors and trials with different follow-up. The impact of SGLT2 inhibitors on the risk of UTIs remains uncertain; the upcoming major trials may provide important insights on this issue. When their results are available, an updated meta-analysis is warranted.

Since even more agents of this new class are completing their clinical programs and reaching market authorization, our antidiabetic armamentarium is now equipped with more promising and effective weapons in the fight against diabetes.