Treatment-resistant hypertension is defined as BP uncontrolled on ≥3 or controlled on ≥4 different classes antihypertensive medications at optimal doses and preferably including a diuretic.1 Apparent TRH is often used, since measurement artifacts, suboptimal treatment regimens, i.e., contributors to pseudoresistance, are not assessed in many epidemiological studies.2 In the USA, the prevalence of aTRH among all adults hypertensives rose from ~6 to 11% and from 16 to 28% in treated uncontrolled hypertensives between 1988 to 1994 and 2007 to 2010.

The rising prevalence of aTRH partially reflects more intensive treatment.2-4 More intensive treatment is a key factor in improving hypertension control, but leads to higher percentages of controlled patients on four or more and uncontrolled patients on three or more BP medication classes. Insulin resistance is also linked with TRH.5 Thus, aging of many population groups globally combined with the epidemic of obesity and diabetes is likely to increase the worldwide prevalence of aTRH over time.6-8 An effective global strategy to ameliorate the adverse effects of access to excess calories, sugar, fat, salt, labor-saving devices, and passive entertainment as well as more effective antihypertensive medications are interventions that could limit the expected rise in prevalence of aTRH globally.

Measurement artifacts are common, affecting 30 to 50% of aTRH patients.9-11 Thus, it is important to obtain accurate BP values, which are representative of usual values outside the office. With regard to accuracy, most BP values in the majority of clinical settings are not measured according to established protocol and reflect errors inherent with the flawed methodology.12,13 Yet, BP can be measured accurately in the office setting by trained individuals adhering to a standardized measurement protocol and still not represent out-of-office values due to an “office” or “white coat” effect. Automated office BP, in which a series of BP values are obtained with the patient alone in the examination room, minimizes the office effect and better approximates usual daytime readings.14 The Canadian Hypertension Guidelines recommend automated office BP pressure as the preferred in-office measurement method.15

Our group reported that ~50% of patients with uncontrolled aTRH were not prescribed optimal therapy defined as three different antihypertensive medications, including a diuretic at ≥50% of the maximum recommended or approved doses, e.g., hydrochlorothiazide 25 mg, lisinopril 20 mg, and amlodipine 5 mg daily.16 While not all patients with aTRH tolerate optimal therapy, it is likely that >50% would be able to tolerate such treatment if prescribed. Thus, clinicians appear to have opportunities to improve BP control by optimizing doses of prescribed antihypertensive medications in patients with aTRH who have sustained hypertension outside the office setting.

Inadequate adherence, or failing to take ≥75% of prescribed medication, impacts ~10 to 60% of aTRH.1,2 Direct questions, such as “Are you taking your medications?” often elicit the socially desirable response. Inviting patients to share any concerns about costs, side effects, or other barriers is more likely to elicit clinically useful information. Any admission of nonadherence is often associated with taking <75% of prescribed medication.17

Medication possession ratio (MPR) or the percentage (fraction) of days the patient possesses the medication during a given time period, e.g., 6 to 12 months, is a reasonable proxy for adherence.18 A discussion with the dispensing pharmacist or examining pill bottles to assess the number of prescription refills relative to initial prescription and visit dates provide useful, although imperfect assessment of MPR. Medications that are “automatically” mailed to the patient's home provide less useful information with regard to MPR as a proxy for adherence.

In our previous review in Hypertension Journal outlining a pragmatic approach to management of TRH, adherence with healthy lifestyle therapy and evaluation for secondary causes of TRH were addressed. Those important topics will not be repeated in this update but remain relevant in managing aTRH.

In patients with aTRH based on office BP, the subset with nonhypertensive out-of-office BP values has a more favorable prognosis.10,11 Patients trained in BP self-monitoring who use an accurate device can provide reliable out-of-office readings.19 Using an accurate, validated ambulatory BP monitor is another method for obtaining useful BP values outside the office setting.9-11 Both self-monitored BP and ambulatory BP monitoring provide prognostically important information beyond office BP.22 The prognosis of patients with uncontrolled aTRH and suboptimal regimens or adherence has not been specifically studied. However, the magnitude of adverse outcomes in aTRH is unlikely to be explained only by the subset without pseudoresistance, i.e., true treatment resistance.

In our South Carolina practice network, among patients without aTRH, the composite cardiovascular outcome of stroke, CHD, and chronic heart failure (CHF) was 31% lower in the group controlled to <140/<90 mm Hg than in the group with higher BP values (hazard ratio, 0.69; 95% confidence interval, 0.65—0.74).26 In contrast, among patients with aTRH, the group controlled to <140/<90 had 13% fewer composite cardiovascular events (hazard ratio, 0.87; 95% confidence interval, 0.82—0.93) than the group with higher BP values. The significant difference in the benefit of BP control between the aTRH and non-aTRH groups occurred, despite the fact that the absolute difference in BP between the controlled and uncontrolled groups was virtually identical.

Cardiovascular outcomes in patients with controlled vs uncontrolled aTRH

For uncontrolled aTRH, an exemplary base regimen and potential drug changes based on clinical situation are shown

In hypertensive patients without compelling indications for β-blockers, a thiazide-type diuretic, angiotensin receptor blocker and calcium channel antagonist will comprise a commonly prescribed three-drug regimen.16 An exemplary regimen that provides three different classes of antihypertensive medications at half- and maximal doses are provided in Table 2. Half-maximal and maximal recommended doses are shown.

Adding a low-dose aldosterone antagonist, e.g., 12.5 to 50 mg daily spironolactone, lowers BP in many TRH patients. In fact, several studies in patients with uncontrolled TRH found that spironolactone at doses averaging ~25 mg daily lowered BP 20—25/10—12 mm Hg, which is roughly double the response to several other drug classes.1,27 Of interest, Guyton and Hall28 modeling of the circulation >50 years ago indicated that aldosterone played a growing role in BP regulation over time (Graph 1). Over time aldosterone was projected to play a greater role in BP regulation than renin/angiotensin vasoconstriction, baroreceptors, and chemoreceptors. If patients are not ideal candidates for spironolactone, e.g., baseline serum K+ >4.5 or estimated glomerular filtration rate (eGFR) <45 to 50 mL/1.73 m2/min,29 then changing from hydrochlorothiazide to chlorthalidone or a long-acting loop diuretic, e.g., torsemide, can lower BP. Chlorthalidone is more likely than hydrochlorothiazide to be effective with eGFR 30 to 44 [Stage 3B chronic kidney disease (CKD)].1 Patients with eGFR <30 mL/1.7 m2/min may require a loop diuretic, e.g., torsemide, to improve volume control and lower BP. Patients with eGFR <15 often require dialysis for volume and BP control.

BP regulation over the short-, intermediate-, and long term. BP is a complex variable with multiple inputs as shown. In response to an acute change in arterial BP, the time course and potency of the various inputs to BP homeostasis are shown. The kidney is the major regulator of BP. Factors intrinsic or extrinsic to the kidney which raise or lower the threshold for pressure natriuresis are critical in determining the long-term BP set point. Adapted from data in Guyton and Hall28 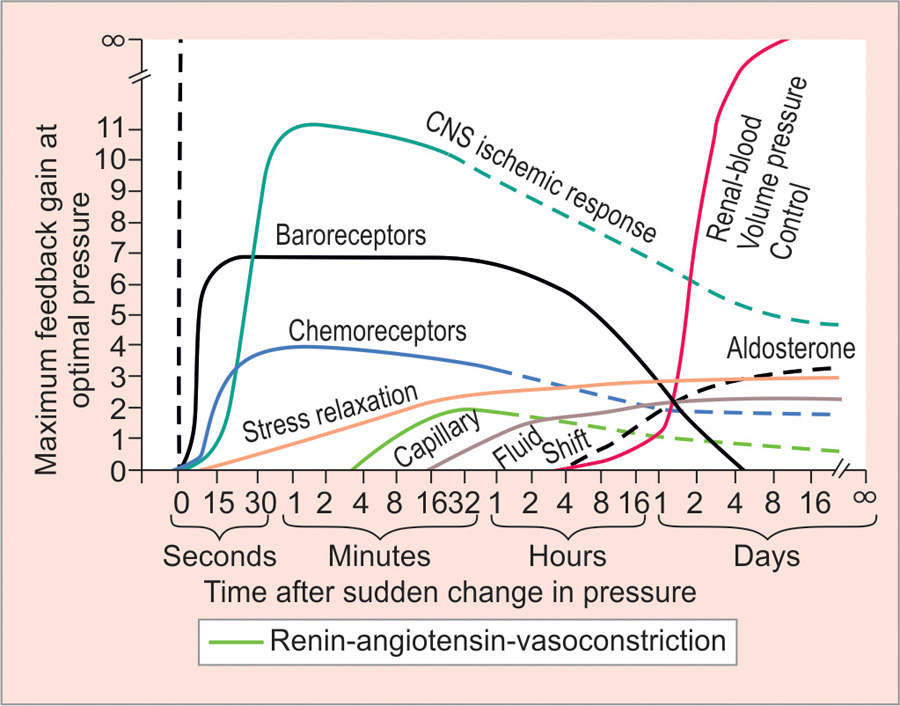 In patients with progesterone and antiandrogenic effects of spironolactone, eplerenone is an alternative aldosterone antagonist devoid of sex steroid effects. Since aldosterone raises BP in significant part by increasing the number and activity of epithelial sodium channels (ENaC), amiloride, which blocks the ENaC, is also effective. However, amiloride does not block the adverse effects of aldosterone on target organs, e.g., the heart and kidney. Monitoring for hyperkalemia is important with both aldosterone antagonists and ENaC inhibitors. Aldosterone antagonists and ENaC inhibitors have a low risk when started at modest doses in individuals with eGFR >45 and serum potassium <4.6 mmol/L. While these agents can be used cautiously when essential in individuals with lower eGFR or higher serum potassium, beginning at very low doses and frequent monitoring (e.g., ≤7 days), for adverse effects is warranted when initiating treatment or increasing doses.

An important practical concern raised by clinicians caring for patients in very hot climates is the potential for volume depletion, hypotension, and possibly heat stroke with aggressive diuretic therapy. In low-renin, presumably volume-expanded patients living in very hot climates, this concern may be mitigated by using drug classes other than diuretics, e.g., dual calcium channel blockade, which are effective antihypertensive agents in patients with low-renin values.30-32 It is important to note the lack of proven safety advantage for this approach among hypertensive patients subject to prolonged high ambient temperatures.

For patients with neurogenic hypertension, alpha and/or beta-receptor blockade or central sympatholytics, e.g., guanfacine, can lower BP. Heart rates of ~80 beats/minute and higher have been associated with increased cardiovascular morbidity and mortality, especially sudden death in treated and untreated hypertensive patients.33 β-blockers, which lower heart rate, reduce cardiovascular morbidity and mortality in patients with clinical CHD and heart failure. The benefits of β-blockers for primary prevention have been debated, although evidence supports their use as initial antihypertensive therapy in adults <60 years old.15

In the absence of compelling indications, renin/angiotensin and β-blockers may be withdrawn from low-renin and diuretics from high-renin patients, while retaining BP control.31,32 In other words, renin-guided therapy can improve BP control without increasing the number of antihypertensive medications in a substantial proportion of patients. Medium-renin patients respond well to both groups of medications with preference given to the group not prescribed. For example, in a patient with medium-renin values on a β-adrenoceptor blocker and angiotensin receptor blocker, a diuretic or nondihydropyridine calcium antagonist would be preferred, whereas if the patient were taking a diuretic and calcium channel antagonist, a renin/angiotensin system or β-blocker would be preferred.

Hypertension guidelines generally recommend adding and uptitrating antihypertensive medications until goal BP is achieved. The implied assumption is that the benefits of treating hypertension are mainly related to BP lowering irrespective of the number of antihypertensive medications required to achieve BP reduction. However, as summarized in Table 1, this assumption may not always be valid.

Thus, in patients uncontrolled on three or more or controlled on four or more medications, it is important for clinicians to recognize that these individuals likely remain at higher risk for cardiovascular events than patients prescribed fewer medications with comparable BP values. To mitigate risk for atherosclerotic cardiovascular events, clinicians are encouraged to optimize control of other cardiovascular risk factors with special attention to prescription of evidence-based statin doses in statin-eligible patients.34,36 Even moderate statin doses, e.g., atorvastatin 10 mg daily in the Anglo-Scandinavian Outcomes Trial (ASCOT), were associated with a 36% reduction in coronary events and less aTRH.35 This is consistent with other evidence, suggesting a modest BP lowering effect of statins, which appears to be greater in adults with rather than without hypertension. Clinicians are also encouraged to use antihypertensive medications with compelling indications37 in patients with CKD, CHF, and cardiovascular disease, which amplify risk for incident cardiovascular events.

In summary, aTRH is a common condition. Using the pragmatic approach outlined in this update and our previous pragmatic review,21 clinicians can identify and address pseudoresistance, screen for secondary hypertension, and initiate changes to lifestyle and pharmacotherapy to improve BP control. It is likely that ≥80% of aTRH patients can be successfully managed in primary care. For complex cases of secondary hypertension and truly refractory hypertension, referral to a hypertension specialist is warranted for further management and consideration of device-based therapies.