Hypertension is the most common medical condition complicating normal pregnancy.1,2 It can present with different manifestations at different time lines in pregnancy, and can culminate in serious maternal and perinatal mortality and morbidity. A team management approach comprising obstetrician, cardiologist, and nephrologist is often called for, especially in complicated and high-risk cases, keeping in mind the challenges of choosing drugs that are safe in pregnancy and nursing. The sudden temporal transition of a relatively “benign” chronic hypertension in pregnancy to a life-threatening complication, like eclampsia, is often rapid and unpredictable, making it “the mother of all challenges.”

The physiology, etiology, consequences, classification, diagnosis, and treatment of hypertension in pregnancy are complicated, vague, and often controversial; knowledge in this area is evolving constantly. The traditional algorithms have blind spots and grey areas that need to be addressed, especially in the background of Indian scenario.

This review and discussion is intended to analyze the present information, tweeze it, and suggest alternative classification and diagnostic algorithm suitable and practically useful to the clinicians at the bedside in India.

The ACOG describes four major hypertensive disorders in pregnancy. This is a time-tested classification that is accepted worldwide and is used by the clinicians in India too. They are as follows:

Preeclampsia is a systemic syndrome characterized by widespread maternal endothelial dysfunction. It presents as hypertension that develops in the latter half of pregnancy (after 20 weeks of gestation) along with proteinuria (classically greater than 300 mg per day).

Preeclampsia can present in the absence of proteinuria, wherein there has to be features of any one of the following target organ damages (TODs).

A severe and dreaded complication of PE is eclampsia, characterized by PE plus seizures (not attributable to any other causes like metabolic or neurogenic).

The HELLP syndrome, which is an acronym for Hemolysis, Elevated Liver enzymes and Low Platelet count, has poor outcome. It complicates about 1 in 1,000 pregnancies.3,6,7 Disseminated intravascular coagulation occurs in 20% of women with HELLP syndrome, while pulmonary edema is found in 6% cases. Up to 8% of HELLP syndrome can occur immediately after delivery. Generalized activation of coagulation, fibrin cross-linking in the small blood vessels, microangiopathic hemolytic anemia, and consumption of platelets form the basic pathophysiology of this syndrome.

So with the present algorithm, we ask two key questions (Table 2). One the timing, two, the presence of PE.

Timing of onset is sometimes vague and complicated, especially in Indian context. In the Indian social scenario, the pregnant mother travels back to her parental home for confinement and that results in a change of caregiver somewhere in mid-trimester. In a poorly networked health system, it is often difficult to get hold of records of BP to risk stratify, depending on time of onset of hypertension. Similarly, many women in rural background may present late, making diagnosis on a time-scale-based algorithm problematic. 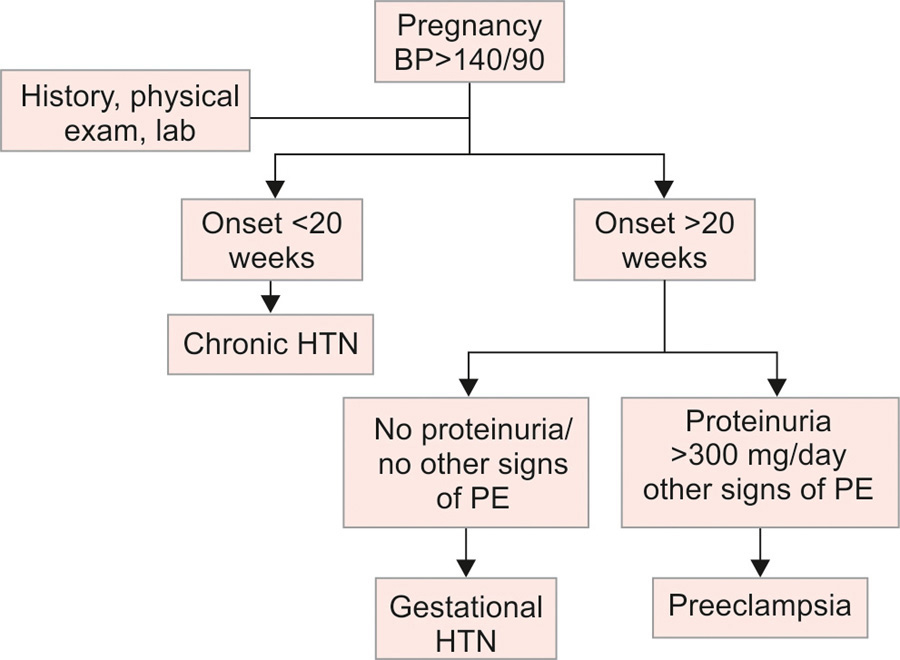 The systolic BP tends to remain mostly unchanged in pregnancy (slight reduction till mid-pregnancy), while the diastolic BP tends to progressively decline, reaching its lowest level between 20 and 24 weeks of gestation, presumably caused by the effects of vasodilatory neurohormones and placental arteriovenous shunts. This fall may be exaggerated in the presence of “chronic hypertension” of pregnancy. So a “slightly” high BP around 20 weeks of pregnancy might be important, and needs to be investigated to rule out early warning signs of PE. The gravid uterus in later part of pregnancy may cause compression on the splanchnic vascular beds, alter venous return, and cause change of supine BP, mandating the need for BP recording in left lateral decubitus in the pregnant mother.

Despite the fact that large majority of chronic hypertension are primary, young women (as compared with elderly women) are more likely to suffer from “secondary” hypertensions, like renovascular obstruction, renal parenchymal disease, adrenal pathology (aldosteronism, Cushing's syndrome, or pheochromocytoma). Ruling out such secondary pathology in pregnancy is a challenge. During normal pregnancy there is increased levels of aldosterone and renin (in contrast to increased aldosterone and decreased renin in aldosteronism), making diagnosis more difficult.

RISK TO MOTHER AND FETUS

Apart from higher perinatal death, intrauterine growth retardation and an increased incidence of congenital cardiac malformations are more common in pregnancy complicated by hypertension. Surprisingly, control of hypertension with antihypertensive drugs has not shown to reduce such complications.11

A useful rule of thumb is that there is no substantial evidence that drug therapy in mild to moderate hypertension alters maternal or fetal outcome, in the absence of high-risk features as described earlier (Flow Chart 2).13,14

In the proposed algorithm, the diagnosis moves in steps:

Step 1. Ambulatory BP or home BP is used to confirm the presence of hypertension, since one-third of those detected to have hypertension may be “white coat effect.”

Step 2. Features of PE are checked.

Step 3. Presence of high-risk features is looked for. This identifies those who need aggressive treatment, in contrast to those who do not. 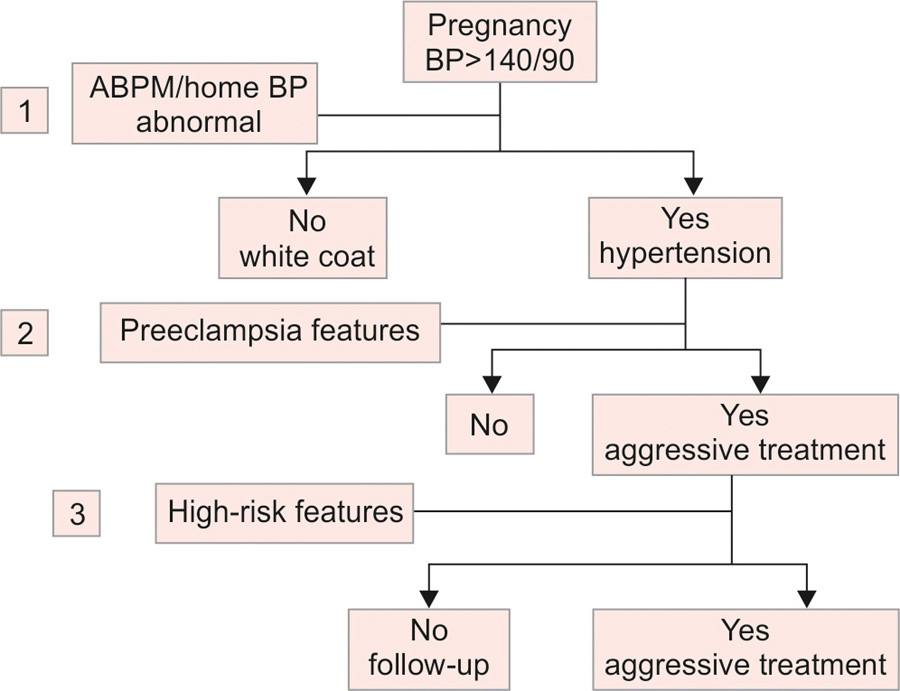 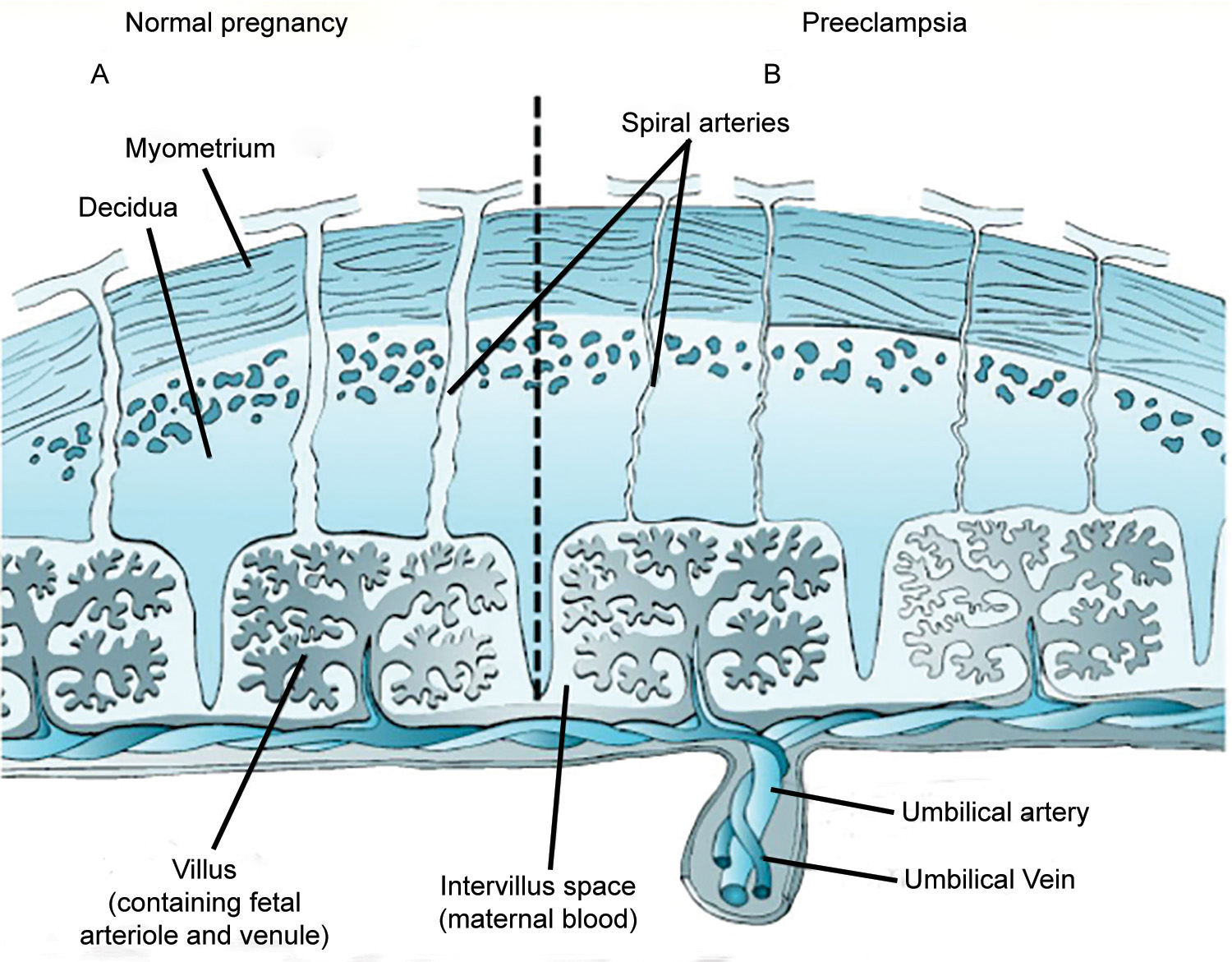 During the course of normal pregnancy, the placental cells tend to migrate up the uterine artery enabling it to remodel. This helps in hemodynamic prevention of vasoconstriction by a complex array of biochemical cascade. Abnormality of trophoblastic penetration leads to defective vasomotor function of spiral arteries, remodeling, and resultant ischemia. This results in alteration of cytokine levels, increase in endothelins, thromboxane A2, and reduction of nitric oxide and PlGF (Fig. 1).

The endothelium expresses a molecule called sFlt-1, which tend to combine with PlGF and neutralize it. During PE, the migration of the fetal cells to the uterine “spiral” artery is somehow impaired, leading to altered vasoactive neurohormones, a reduction of PlGF and increase of sFlt-1. Such biochemistry alteration remained in the area of research till recently. An elevation of sFlt-1 and reduction of PlGF have been fairly consistent and conform to the disease progression. Alteration of the ratio of sFlt:PlGF showed promise in small studies (Table 4).15-17

The cut-off values are shown in Table 5.

The introduction of sFlt-1:PlGF ratio in the diagnostic algorithm makes room for a new four-question algorithm, which we feel could be simple and appropriate (Table 6).

Termination of pregnancy on detection of PE

In contrast, closer to 37 weeks, expectant management is followed by planned delivery at 37 weeks7 (Table 7).

Managing hypertension in pregnancy is a challenge. The present algorithm based on time of onset and detection of hypertension and classifying it into gestational and chronic variety fails in the bedside because of its poor predictability of development of PE and future complications. A risk-based algorithm may be better for the clinician. Introduction of point of care biochemical risk markers (sFlt-1:PlGF) promises to bring about significant change in diagnosis and risk assessment. A new proposed simple four-question algorithm needs validation.